A true story about how the kids are affected:

The August day began just like every other summer day that year. The nine year-old girl did all the same things she had done many times before. She got dressed, fixed herself a bowl of Corn Flakes, ate, fed her dog Hope, cleaned up, and went outside to play with Hope.

It would be many years before the child would fully understand the impact that this particular August day would have on the rest of her life.

Things went much the same as they always had until after dinner. The little girl’s mother told her to stay around the house because they would be leaving soon. The girl wondered what her mom meant; they had never gone anywhere before.

Sure enough, it wasn’t long before her mom’s friend drove up, and the young girl was told to get in the car with her older brother and sister. She sat quietly in the back, looking out the window, enthralled with the many wonders whizzing by. This was, indeed, a real treat.

After some time, they reached their destination. The three kids were told to get out of the car and wait there. Obediently, they did as they were told. They got out and watched their mother and her friend drive away.

The three of them sat on the curb for many hours, and the little girl was getting sleepy. “When is Mommy coming back? I’m sleepy, and I want to go home to bed.”

Her big brother told her they weren’t going home. “Mom told me to stay here till our father comes home.”

“Oh, we’re going to see Daddy tonight”, the little girl thought to herself, “That’s why we’re here. I wonder what he looks like. I haven’t see or heard from him since he left a long time ago; I was in the second grade then, and next month I start the fifth grade.” 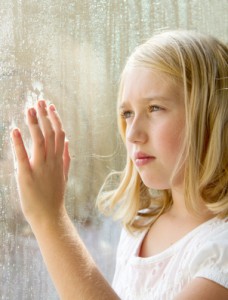 As time wore on, even the excitement of seeing her father again couldn’t keep the little girl awake. She lay on the curb and fell asleep. Eventually, her oldest sister arrived, took the three kids in the house, and put them to bed.

Suddenly, in the middle of the night, the little girl was awakened by screaming!

“I told you if I stopped support payments, she would dump the kids”, the little girl heard a man say.

The little girl whimpered softly to herself. “What will happen to Hope? Without me there to protect him, will Mommy send him away? He won’t eat without me. He’ll cry all the time waiting for me to come for him. He won’t understand what’s happened. He’ll think I don’t love him anymore. Please, God, take care of Hope, and tell him I love him.”

Also see “How Could You“, written through the eyes of the abandoned pet.