Looking back, we can see
the trend over the years:

According to the latest New Jersey Animal Intake and Disposition Summary, an average of 25 cats and dogs were euthanized in 2019. A total of 81,199 animals were impounded, 53,258 were redeemed or adopted, and 9,136 were euthanized.

While these numbers have continued to drop over the last several years, there is always more work to be done as long as any cats or dogs are being euthanized! You have to know where you have been and where you are now in order to know where you need to go. 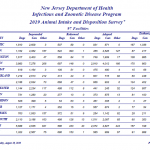 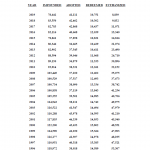 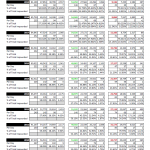 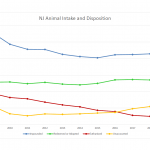 At left is a line graph showing total numbers of all types of animals impounded (blue), adopted or redeemed (green), euthanized (red), and unaccounted* (yellow), from 2009 through 2019. (Click thumbnail to see larger image.) The green and red lines continue to gradually move further from each other. That gap should become wider and wider!

(*”Unaccounted” can mean many things, depending on how shelters keep their records. It could be animals transferred to other shelters in NJ or in other states, transferred as barn cats, pulled by rescues, etc. The numbers that are most important are for those euthanized and adopted [red and green]. The number impounded is lower, and that is good. That is likely due to the effectiveness of spay/neuter education and programs.)

The truth is that the number of cats dying in New Jersey is much, much, much higher than what is reflected in the figures reported by those shelters that volunteer to complete the annual New Jersey Animal Intake and Disposition Survey.

Not all facilities volunteer to submit their numbers.

Majority of cats are homeless and ignored. They are left on the streets and in the woods to fend for themselves. To add to this tragedy, they have not been spayed or neutered so they continually reproduce. Litter after litter of kittens destined to become homeless cats is the result. This cycle of cruelty is rarely ever fully addressed in New Jersey, the country, or anywhere in the world.

The bottom line is most homeless stray/feral cats aren’t taken to a facility where they are counted and many times killed. That doesn’t mean that they do not die. They just suffer and die in silence on the streets and in the woods. The truth is they do so in never-ending numbers because, as we pointed out earlier: “This cycle of cruelty is rarely ever fully addressed.”

Why? Because it takes a ton of money, time, effort, dedication, cooperation, and major coordination of a comprehensive plan.

See Gems of Wisdom and Pearls of Knowledge: Humane Messages at Compassion Central